Putting the community at the heart of the church.

St Andrews Action Abroad raises between £2000 and £3000 every year which is divided between two Projects. We raise money both by social functions within the parish, our Lent Appeal, from sales of various items, particularly of cards and wrapping paper and from numerous miscellaneous donations.

If you have any suggestions of fund raising events or of future projects that we might support, please contact Clare Conboy (277876; clare.conboy@ntlworld.com).  We would also be delighted to hear from anybody interested in joining the Action Abroad committee.  We generally meet three or four times a year.  We would also be pleased to hear from anybody who would be interested in joining the Art Exhibition team.

The primary objective of St Andrews Action Abroad is to connect with and to raise funds for projects and organisations in the developing world and in so doing, to foster a sense of community spirit within the congregation.  Funds are raised through a variety of social events, an Annual Art Exhibition held in the church, an appeal during the period of Lent and numerous individual donations.  Typically, we raise between £2000 and £3000 every year which is divided between two projects over a five year time period.  Over the years through child sponsorship, we have supported individual children and their communities in Bangladesh and in Honduras.  We have also supported a nursery school in Zanzibar and a seed and tool distribution programme in Malawi. 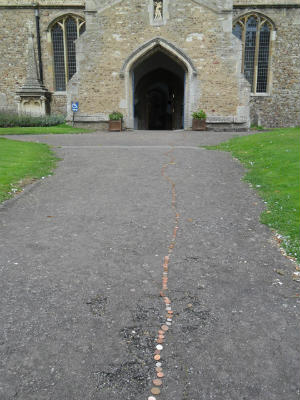 We are now into our third year of supporting two very different organisations in North Africa, both within the vast Diocese of Egypt with North Africa and the Horn of Africa (more information at http://dioceseofegypt.org).

Money that we raised has in the past been divided between the support of orphans who are cared for within their communities rather than in orphanages, and the establishment of women’s mutual help groups among the Negede Woitto people who have been displaced from their homes as the town of Bahar Dar expands on the shores of Lake Tana.  £100 will clothe, feed and educate one orphan, while a slightly larger sum will establish a support group which will ultimately become self-sufficient.

In 2015, the 30th Anniversary Year, PfC is entering into a new project, Genda Tesfa, (the Village of Hope) on the outskirts of Dire Dawa, which is a longstanding community for families affected by leprosy.  As those afflicted are often avoided by those outside the community and are frequently unable to work, deprivation is common among these people.  In partnership with local people, the project seeks to install basic sanitation (water points, shower and toilet blocks), support orphans and other needy children, to ensure that poor children have access to education, and to promote local initiatives such as backyard vegetable growing, women’s savings groups and vocational training.

A talk by Pete Jones of Partners for Change at our Harvest Supper: click here.

Quoting from a recent PfC communication: 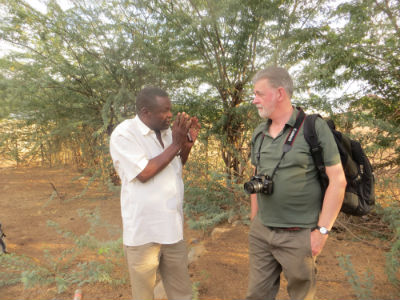 Abebe Makonnen is the energetic and inspiring manager of the projects in Dire Dawa.  Part of the city was affected by flash floods, which washed away people, livestock and homes.  He mobilised local people to construct terracing on the bare slopes above the town from which the flood water came.  Now there are bushes, trees – and wild life has returned – and no more floods.  Its recognised as a huge achievement in climate change adaptation.  Now he has set up the Genda Tesfa project

And relating to an example of children in need of help:

This is Fayo.  She’s 20 years old and cares for her mother, who has a 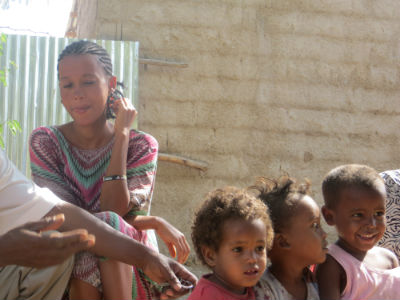 mental illness, her mother’s two youngest children and her own child – pictured here with her.  Her partner wanted her to move away with him to where he had a job.  She said she could not leave her mother.   Their home is a builder’s hut which they share with a pile of gravel.  They can’t keep anything there because the mother burns the children’s clothes and throws away the food Fayo cooks.

More information can be found at http://www.pfcethiopia.org/ and in relation to John Binn’s visit to Ethiopia at http://johninethiopia.wordpress.com/ 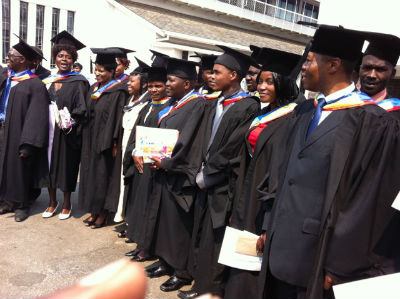 Domboshawa was established in 1991 through the vision of leading Zimbabwean Christians. Its purpose was to meet the demand for a uniquely Zimbabwean style theological education at university level, which would provide practical ministry training. Domboshawa is an indigenous institution- created by Zimbabweans for leaders of the church in Zimbabwe – and beyond!!’

“Our Vision is to become a centre of excellence in internationally recognised theological education and Christian leadership training.”

These programmes together provide a balance of academic and ministry training. 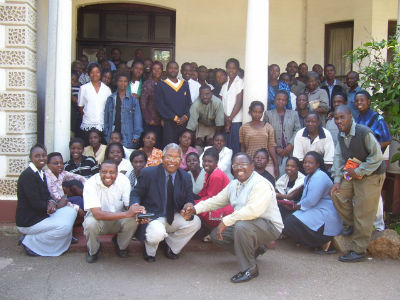 Principal, chairman and another trustee in front of students

A.      Yes, and in the middle of Zimbabwe’s crisis Church leaders have been some of the ruling party’s most outspoken critics and the churches have been crucial in picking up the pieces, in helping those who have had their homes bulldozed, victims of violence and poverty, in binding up the broken hearted.   The church is one of the strongest elements of Zimbabwean civil society and needs our support.

2 Q  Why fund a theological college?

A.  Roy Muzaziwa, the Principal of Dombosahwa House Theological College (DHTC), says that ‘Africa’s biggest need is leaders of integrity who are capable, who fear God, who are trustworthy, and who hate a dishonest gain (Ex 18:21).   The college equips Zimbabwean Christians in leadership and ministry (broadly defined).

3) Q. Why can’t the college support / support itself?

A.  The college does raise its own funds from fees but these are not enough to cover costs.  It does find donors locally and students help raise money for projects, such as the projected block of classrooms and lecture halls; it rents out rooms in the holidays and uses its mini-bus as a taxi.   But these endeavours are never enough.   The British Trustees try to raise £15,000 each year for the college, but we have struggled in recent years and new sources of giving are always welcome.   Fifteen thousand pounds covers the fees of one overseas student to study in Britain for a year but it makes a significant contribution to running the costs of an African institution teaching 50 plus students a year.

4) Q. What would partnership mean?

A. i) We would endeavour to stay informed about developments in the college via the website, the Principal’s annual report, college newsletters;

ii) Roy Muzaziwa, the college Principal has preached in St Andrews and is happy to do so again.  He could also lead Bible studies and other teaching sessions.

iii) The college is open to having people visit and keen to make use of their gifts:  teaching, accountancy, computing, library skills, fund raising.

Visitors have enrolled in the college for a term or two.  Those visiting would be encouraged to report back.

5) Q. What is the Domboshawa Trust?

A. It exists simply to support the work of DHTC.  Its currently trustees are:

A.  They would be used for the upkeep of the college: salaries, bills (telephone, electricity), maintenance etc.  Some donors like them to go towards fees for specific students but it all ends up in the same pot.

7) Q. Are there any administrative costs?

A. Not really.  The UK Trustees meet in David Maxwell's room in Cambridge or church rooms in London.  All trustees pay their own travel costs.  The only admin costs are those involved in money transfer - eg Western Union 1-3%.